Martin Shaw is the Chief Executive of the Association of Financial Mutuals, a position he has held since its launch in January 2010. Martin works with the AFM Board to determine the strategic direction and priorities of AFM and directs the work of the Association towards those aims.

Previously Martin was General Secretary of the Association of Friendly Societies, one of the predecessor organisations which merged to form AFM.

Prior to that Martin worked for the Association of British Insurers, where he was Director, Raising Standards, leading a number of projects designed to improve confidence in the industry. Before that he worked for the Consumer Protection department of the FSA, working on a range of policy issues and was previously employed by building societies and banks for 15 years, mainly in sales and planning functions. 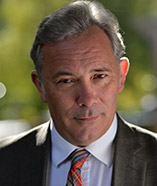